Sir Chandrasekhara Venkata Raman, FRS(Fellow of Royal Society) (7 November 1888 – 21 November 1970) was an Indian physicist, born in the formerMadras Province, whose ground breaking work in the field of light scattering earned him the 1930 Nobel Prize for Physics. He discovered that, when light traverses a transparent material, some of the deflected light changes in wavelength. This phenomenon is now called Raman scattering and is the result of the Raman effect. In 1954, he was honoured with the highest civilian award in India, the Bharat Ratna.

Raman’s father initially taught in a school in Thiruvanaikaval, became a lecturer of mathematics and physics in Mrs. A.V. Narasimha Rao College, Vishakapatnam (then Vishakapatnam) in the Indian state of Andhra Pradesh, and later joined Presidency College in Madras (now Chennai).

At an early age, Raman moved to the city of Visakhapatnam and studied at St. Aloysius Anglo-Indian High School. Raman passed his matriculation examination at the age of 11 and he passed his F.A. examination (equivalent to today’s Intermediate exam,PUC/PDC and +2) with a scholarship at the age of 13.

In 1902, Raman joined Presidency College in Madras where his father was a lecturer in mathematics and physics. In 1904 he passed his Bachelor of Arts (B.A.) examination: He stood first and won the gold medal in physics. In 1907 he gained his Master of Arts (M.A.) degree with the highest distinctions.

In 1917, Raman resigned from his government service after he was appointed the first Palit Professor of Physics at the University of Calcutta. At the same time, he continued doing research at the Indian Association for the Cultivation of Science (IACS), Calcutta, where he became the Honorary Secretary. Raman used to refer to this period as the golden era of his career. Many students gathered around him at the IACS and the University of Calcutta.

On 28 February 1928, Raman led experiments at the IACS with collaborators, including K. S. Krishnan, on the scattering of light, when he discovered what now is called the Raman effect. A detailed account of this period is reported in the biography by G. Venkatraman. It was instantly clear that this discovery was of huge value. It gave further proof of the quantum nature of light. Raman had a complicated professional relationship with K. S. Krishnan, who surprisingly did not share the award, but is mentioned prominently even in the Nobel lecture.

Raman spectroscopy came to be based on this phenomenon, and Ernest Rutherford referred to it in his presidential address to the Royal Society in 1929. Raman was president of the 16th session of the Indian Science Congress in 1929. He was conferred a knighthood, and medals and honorary doctorates by various universities. Raman was confident of winning the Nobel Prize in Physics as well, but was disappointed when the Nobel Prize went to Owen Richardson in 1928 and to Louis de Broglie in 1929. He was so confident of winning the prize in 1930 that he booked tickets in July, even though the awards were to be announced in November, and would scan each day’s newspaper for announcement of the prize, tossing it away if it did not carry the news. He did eventually win the 1930 Nobel Prize in Physics “for his work on the scattering of light and for the discovery of the Raman effect”. He was the first Asian and first non-white to receive any Nobel Prize in the sciences. Before him Rabindranath Tagore (also Indian) had received the Nobel Prize for Literature in 1913.

Raman had association with the Banaras Hindu University in Varanasi; he attended the foundation ceremony of BHU  and delivered lectures on “Mathematics” and “Some new paths in physics” during the lecture series organised at BHU from February 5 to 8, 1916. He also held the position of permanent visiting professor at BHU.

During his tenure at IISc, he recruited the talented electrical engineering student, G. N. Ramachandran, who later went on to become a distinguished X-ray crystallographer.

Raman also worked on the acoustics of musical instruments. He worked out the theory of transverse vibration of bowed strings, on the basis of superposition velocities. He was also the first to investigate the harmonic nature of the sound of the Indian drums such as the tabla and the mridangam. He was also interested in the properties of other musical instruments based on forced vibrations such as the violin. He also investigated the propagation of sound in whispering galleries. Raman’s work on acoustics was an important prelude, both experimentally and conceptually, to his later work on optics and quantum mechanics.

Raman and his student, Nagendra Nath, provided the correct theoretical explanation for the acousto-optic effect (light scattering by sound waves), in a series of articles resulting in the celebrated Raman–Nath theory. Modulators, and switching systems based on this effect have enabled optical communication components based on laser systems.

Raman was succeeded by Debendra Mohan Bose as the Palit Professor in 1932. In 1933, Raman left IACS to join Indian Institute of Science in Bangalore as its first Indian director. Other investigations carried out by Raman were experimental and theoretical studies on the diffraction of light by acoustic waves of ultrasonic and hypersonic frequencies (published 1934–1942), and those on the effects produced by X-rays on infrared vibrations in crystals exposed to ordinary light.

He also started the company called Travancore Chemical and Manufacturing Co. Ltd. (now known as TCM Limited) which manufactured potassium chlorate for the matchindustry  in 1943 along with Dr. Krishnamurthy. The Company subsequently established four factories in Southern India. In 1947, he was appointed as the first National Professor by the new government of Independent India.

In 1948, Raman, through studying the spectroscopic behaviour of crystals, approached in a new manner fundamental problems of crystal dynamics. He dealt with the structure and properties of diamond, the structure and optical behaviour of numerous iridescent substances (labradorite, pearly feldspar, agate, opal, and pearls). Among his other interests were the optics of colloids, electrical and magnetic anisotropy, and the physiology of human vision.

Raman retired from the Indian Institute of Science in 1948 and established the Raman Research Institute in Bangalore, Karnataka, a year later. He served as its director and remained active there until his death in 1970, in Bangalore, at the age of 82.

Genius Discovered:Sir C.V. Raman (second from right) with Prime Minister Jawaharlal Nehru at his laboratory in Bangalore, in 1960.

He was married on 6 May 1907 to Lokasundari Ammal (1892–1980). They had two sons, Chandrasekhar and radio-astronomer Radhakrishnan.

Raman was the paternal uncle of Subrahmanyan Chandrasekhar, who later won the Nobel Prize in Physics (1983) for his discovery of the Chandrasekhar limit in 1931 and for his subsequent work on the nuclear reactions necessary for stellar evolution.

During a voyage to Europe in 1921, Raman noticed the blue colour of glaciers and the Mediterranean sea. He was motivated to discover the reason for the blue colour. Raman carried out experiments regarding the scattering of light by water and transparent blocks of ice which explained the phenomenon.

There is an event that served as the inspiration of the Raman effect. On a December evening in 1927, Raman’s student K. S. Krishnan (who later became the Director of theNational Physical Laboratory) gave him the news that Professor Compton had won the Nobel Prize for his studies of the scattering of X-rays. This led Raman to theorize that if theCompton effect is applicable for X-rays, then it may be for light also, and to devise some experiments.

Raman employed monochromatic light from a mercury arc lamp which penetrated transparent material and was allowed to fall on a spectrograph to record its spectrum. He detected lines in the spectrum which he later called Raman lines. He presented his theory at a meeting of scientists in Bangalore on 16 March 1928, and won the Nobel Prize in Physics in 1930. 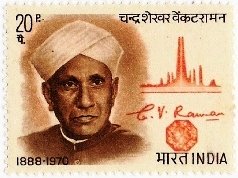 Bust of Chandrasekhara Venkata Raman which is placed in the garden of Birla Industrial & Technological Museum.

Raman was honoured with a large number of honorary doctorates and memberships of scientific societies.

India celebrates National Science Day on 28 February of every year to commemorate the discovery of the Raman effect in 1928.

The Raman Research Institute, founded by Raman after his tenure at IISc, curates a collection of Raman’s research papers, and articles on the web.

At the end of October 1970, he collapsed in his laboratory, the valves of his heart having given way. He was moved to hospital and the doctors gave him four hours to live. He survived and after a few days refused to stay in the hospital as he preferred to die in the gardens of his Institute surrounded by his flowers.

Two days before Raman died, he told one of his former students, “Do not allow the journals of the Academy to die, for they are the sensitive indicators of the quality of science being done in the country and whether science is taking root in it or not.” That same evening, Raman met with the Board of Management of his Institute and discussed (from his bed) with them any proceedings with regards to the Institute’s management. Raman died from natural causes early next morning on 21 November 1970.