She spent a decade as an Executive Vice President of her father’s company – the Trump Organization – as well as serving as a boardroom judge on her father’s TV show The Apprentice.

Ivanka Marie Trump was born in Manhattan, New York City, to Czech-American model Ivana Marie (née Zelníčková) and to the current President of the United States Donald John Trump. Her father has German and Scottish ancestry. The name Ivanka is a diminutive form of Ivana. Trump’s parents divorced in 1991, when she was nine years old. She has two brothers, Donald Jr. and Eric; a half sister, Tiffany; and a half brother, Barron.

Trump attended the Chapin School in Manhattan until she was 15, when she transferred to Choate Rosemary Hall in Wallingford, Connecticut, where she characterized its “boarding-school life” as like a “prison”, while her “friends in New York were having fun”.

Trump is bilingual, speaking English and French. Unlike her brother Donald Jr., she has only elementary knowledge of her mother’s native language of Czech.

Before joining the family business in 2005, Trump briefly worked for Forest City Enterprises. In 2007 she formed a partnership with a diamond vendor, Dynamic Diamond Corp., to create Ivanka Trump Fine Jewelry, a line of diamond and gold jewelry, sold at her first flagship retail store in Manhattan. In November 2011, Trump’s retail flagship moved from Madison Avenue to 109 Mercer Street, a larger space in the fashionable Soho district. On October 2, 2015, retail website racked.com reported that “Ivanka Trump’s flagship store on Mercer Street appear[s] to be closed” and, noting that the shop had been “stripped clean,” said that it is unclear exactly when the shop stopped doing business.As of October 2016, though, the company’s website lists Trump Tower as its flagship boutique and its only dedicated retail shop, with the brand also available at fine-jewelry stores throughout the US and Canada, as well as in Bahrain, Kuwait, Qatar, Saudi Arabia, and the United Arab Emirates.

Trump is currently Executive Vice President of Development & Acquisitions at the Trump Organization. She also serves on the Board of 100 Women in Hedge Funds, an industry organization that provides support to women professionals in finance.

Trump has her own line of fashion items, including clothes, handbags, shoes, and accessories, which is available in major U.S. department stores. Her brand has been criticized for allegedly copying designs by other designers,and by PETA and other animal rights activists for using fur from rabbits. In 2016, the U.S. Consumer Product Safety Commission recalled “Ivanka Trump”-branded scarves because they did not meet federal flammability standards. A 2016 analysis found that most of the fashion line was produced outside the U.S. 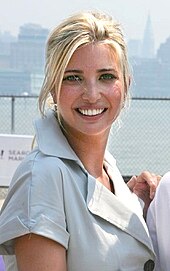 Trump’s first cover was a 1997 issue of Seventeen. Since then, she has walked fashion runways for Versace, Marc Bouwer and Thierry Mugler. She has done advertisement campaigns for Tommy Hilfiger and Sassoon Jeans and was featured on the cover of Stuff in August 2006 and again in September 2007. She has been featured on the covers of Forbes, Golf Magazine, Avenue, Elle Mexico and Top Choice Magazine and in the October 2007 issue of Harper’s Bazaar. She has also featured many times in Love FMD magazine.

She placed Number 83 in the 2007 Maxim Hot 100. She has also placed Number 99 in the Top 99 Women of 2007 and then at 84 in the 2008 edition on AskMen.com. Trump’s page in the Fashion Model Directory provides complete professional details of her prior work in that domain.

The Wharton Club of New York, an alumni club of the Wharton School of the University of Pennsylvania (her alma mater), gave Trump the 2012 Joseph Wharton Young Leadership Award “for being a Wharton alumnus who, early in her career, has demonstrated great potential for leadership and lasting impact.”

In 2006, Trump filled in for Carolyn Kepcher on five episodes of her father’s television program The Apprentice 5, first appearing to help judge the Gillette task in week 2. Like Kepcher, Trump visited the site of the tasks and spoke to the teams. Trump collaborated with season 5 winner Sean Yazbeck on his winner’s project of choice, Trump SoHo Hotel-Condominium.

She replaced Kepcher as a primary boardroom judge during the sixth season of The Apprentice and its follow-up iteration, The Celebrity Apprentice.

In 1997, Trump hosted the Miss Teen USA Pageant, which was partially owned by her father, Donald Trump. In 2003, she was featured in Born Rich, a documentary about the experience of growing up as a child in one of the world’s most affluent families.

Trump was a featured guest-judge on Project Runway Season 3. She was also at a Milwaukee, Wisconsin, event in April 2007 called the Creating Wealth Summit in which she spoke for about 30 minutes about making money and her latest projects. In January 2007 she said that had received an offer to appear on The Bachelorette, but that she declined. In 2010, Trump and her husband, Jared Kushner, briefly portrayed themselves in Season 4 Episode 6 of Gossip Girl.

Trump wrote a book, The Trump Card: Playing to Win in Work and Life, published in October 2009. In June 2016 she announced that she would be publishing a second book titled Women Who Work: Rewriting the Rules for Success.The book is due out in March 2017.

In July 2016, at the Republican National Convention, Trump said of her political views, “Like many of my fellow millennials, I do not consider myself categorically Republican or Democrat.” In 2007, Trump donated $1,000 to the presidential campaign of Hillary Clinton.In 2012, Trump endorsed Mitt Romney for president.In 2013, Trump and her husband hosted a fundraiser for Democrat Cory Booker, and the couple bundled more than $40,000 for Booker’s U.S. Senate campaign.

Trump says she is an advocate for women and Israel.

In 2015, Trump publicly endorsed her father’s presidential campaign. Trump was involved with her father’s campaign by making public appearances in support of him and defending him.However, she admitted mixed feelings about his presidential ambitions, saying, in October 2015, “As a citizen, I love what he’s doing. As a daughter, it’s obviously more complicated.” In August 2015, Trump’s father stated that she was his leading advisor on “women’s health and women” and said it was she who propelled him to elaborate on his views of women.

In January 2016, Trump was featured in a radio ad which aired in the early voting states of Iowa and New Hampshire, in which she praised her father. She appeared by his side following the results of early voting states in 2016, in particular briefly speaking in South Carolina after being invited by her father to speak, thanking the state in doing so.She was not able to vote for her father in the New York primary in April 2016 because she missed the October 2015 deadline to change her registration from independent to Republican.

Trump introduced her father in a speech immediately before his own speech at the 2016 Republican National Convention (RNC) in July.The George Harrison song “Here Comes the Sun” was used as her entrance music. She knew her father quite well and said: “One of my father’s greatest talents is the ability to see the potential in people”, and said her father will “Make America Great Again”.Her speech was well received as portraying her father “in a warmer-than-usual light”, according to the Washington Post, though the article also referred to another Post article that had critiqued the speech. The earlier Post article had questioned whether the policy positions Ivanka Trump espoused were closer to those of Hillary Clinton than to those of her father. After the speech, the George Harrison estate complained about the use of his song as being offensive to their wishes. The next morning, Ivanka’s official Twitter account tweeted, “Shop Ivanka’s look from her #RNC speech” with a link to a Macy’s page that featured the dress she wore.

After her father’s election, Trump wore a bracelet on a family appearance with the president-elect on 60 Minutes. Her company then promoted, in an email blast, the appearance of the bracelet. After critiques for “monetization” the company quickly apologized, calling the publicity the work of “a well-intentioned marketing employee at one of our companies who was following customary protocol”. A spokeswoman said that the company was, post-election, “proactively discussing new policies and procedures with all of our partners going forward”. In 2017, she reportedly stepped down from her post at the Trump Organization, as she will have a quasi-First Lady role in her father’s administration. It has been reported that Ivanka will be filling some of those duties while First Lady Melania Trump remains in New York City, as her son Barron completes the school year. Ivanka denies these allegations. The organization has also removed images of Ivanka and her father from their websites, in accordance with official advice on federal ethics rules.

On December 22, 2016, while on a JetBlue flight with her children awaiting departure from JFK Airport, another passenger reportedly said to Trump, “Your father is ruining the country.” The passenger was removed from the plane by the flight crew, along with his husband who had been tweeting about the incident. Witnesses stated that Trump handled the incident with class and integrity.

During college, Trump was in a nearly four-year relationship with Greg Hersch, an investment banker at Salomon Brothers, Bear Stearns, and UBS. From 2001 to 2005, she dated socialite James “Bingo” Gubelmann.

In 2005, she started dating real estate developer Jared Kushner. The couple broke up in 2008 due to the objections of Kushner’s parents, but the couple got back together and married in a Jewish ceremony on October 25, 2009. They have three children: daughter Arabella Rose Kushner (born July 17, 2011) and sons Joseph Frederick Kushner (born October 14, 2013)and Theodore James Kushner (born March 27, 2016).

Ivanka was a childhood friend of Paris Hilton’s. She was friends with Chelsea Clinton (daughter of Hillary Clinton, Donald Trump’s major opponent in the 2016 U.S. Presidential Election), who said of her in February 2015: “There’s nothing skin-deep about Ivanka. And I think that’s a real tribute to her because certainly anyone as gorgeous as she is could have probably gone quite far being skin-deep.”She is also friends with Georgina Bloomberg, whose father is Michael Bloomberg (a former New York City Mayor who had also considered entering the presidential race against Donald Trump), and says of them: “Donald has always been, and still is, a great father, and I know she is very proud of him and what he has accomplished.”

Trump has a close relationship with her father, who has publicly expressed his admiration for her on several occasions. Ivanka Trump has likewise praised her father, complimenting his leadership skills and saying he empowers other people.

Trump reads books by writers such as Ayn Rand as well as has finance and real estate textbooks in her office.

In January 2017, it was announced that Ivanka and her husband had purchased a home in the Kalorama neighborhood of Washington, DC.

Trump was raised Presbyterian. Before her wedding, in July 2009, after studying for over a year with Rabbi Elie Weinstock from the Modern Orthodox Ramaz School, she converted to Orthodox Judaism and took the Hebrew name “Yael”. She describes her conversion as an “amazing and beautiful journey” and that her father supported her studies from day one, due to his respect for the Jewish religion. She attests to keeping a kosher diet and observing the Jewish Sabbath, saying in 2015: “We’re pretty observant… It’s been such a great life decision for me… I really find that with Judaism, it creates an amazing blueprint for family connectivity. From Friday to Saturday we don’t do anything but hang out with one another. We don’t make phone calls.” Trump sends her daughter to kindergarten at a Jewish school in New York City. She says that “It’s such a blessing for me to have her come home every night and share with me the Hebrew that she’s learned and sing songs for me around the holidays.”