Kriti Sanon (born 27 July 1990)is an Indian model and film actress. After beginning with modelling, she made her acting debut with Sukumar’s Telugu psychological thriller film 1: Nenokkadine. Her first Bollywood film was Sabbir Khan’s romantic action drama Heropanti, for which she won the Filmfare Award for Best Female Debut. In 2015, Sanon starred in the romantic action comedy Dilwale, one of the highest-grossing Bollywood films of all time.

Sanon was born on 27 July 1990 to Rahul Sanon, a chartered accountant and Geeta Sanon, an associate professor atUniversity of Delhi. She has one younger sister, Nupur Sanon. Sanon did her schooling from Delhi Public School, R K Puram and completed her Bachelor of Technology degree in Electronics and Communication, from Jaypee Institute of Information Technology, Uttar Pradesh.

Sanon made her acting debut in 2014, with Sukumar’s Telugu film 1: Nenokkadine, a psychological thriller, in which she played the role of Sameera. The film generated mixed reviews from critics.The Times of India critics stated Sanon “looks pretty” and “acts well”. while the reviewer at Sify.com stated that Sanon “looks gorgeous”, though her performance is “okay”.

Later that year, Sanon made her Hindi cinema debut with Sabbir Khan’s action-romance film Heropanti. Despite the fact that the film received mixed reviews from most critics, Box Office India called it a commercial success at the Indian box office. Taran Adarsh of Bollywood Hungama said she “looks gorgeous and handles her part with certainty and confidence” and that she “has the trappings of a star”, whereas Rajeev Masand said she “looks lovely and makes an impression despite her harebrained role”.Srijana Das of The Times of India, criticised her emoting, calling it “more cheesy than sharp.” For her performance, Sanon won theFilmfare Award for Best Female Debut.

Sanon had her second Telugu release entitled Dohchay directed by Sudheer Varma in 2015.Sanon subsequently appeared in Rohit Shetty’s Dilwale in which she starred alongside Varun Dhawan, Shahrukh Khan and Kajol.The film received mixed reviews from critics, though emerged a major commercial success at the box office, grossing more than ₹394 crore (US$59 million) worldwide.While Taran Adarsh of Bollywood Hungama praised Sanon’s work and said she “is camera-friendly and confident to the T”,Anupama Chopra noted that Sanon, along with Dhawan, “work as bait, meant to bring in the critical youth segment”.

As of February 2016, Sanon has been signed on by Dinesh Vijan for his directorial debut, Raabta, opposite Sushant Singh Rajput. 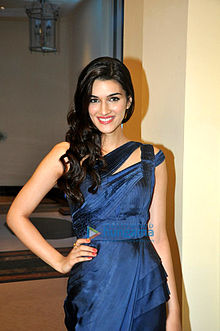