Vainu Bappu was born in an Thiyya family on August 10, 1927, in Chennai, as the only child of Manali Kukuzhi and Sunanna Bappu.His family originally hails from Thalassery inKerala. His father was an astronomer at the Nizamiah Observatory in Andhra Pradesh. He attended the Harvard Graduate School of Astronomy for his PhD after obtaining postgraduate degree from the Madras University. Bappu, along with two of his colleagues, discovered the ‘Bappu-Bok-Newkirk’ comet. He was awarded the Donhoe Comet-Medal by the Astronomical Society of the Pacific in 1949.

In a paper published in 1957, American astronomer Olin Chaddock Wilson and Bappu had described what would later be known as the Wilson-Bappu effect. The effect as described by L.V. Kuhi is: ‘The width of the Ca II emission in normal, nonvariable, G, K, and M stars is correlated with the visual absolute magnitude in the sense that the brighter the star the wider the emission.’The paper opened up the field of stellar chromospheres for research. 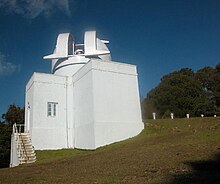 Solar Tunnel Telescope at theKodaikanal Solar Observatory. Bappu served as head of the observatory in 1960.

On his return to India, Bappu was appointed to head a team of astronomers to build an observatory at Nainital. His efforts of building an indigenous large optical telescope and a research observatory led to the founding of an optical observatory of Kavalur, inaugurated in 1986 by Rajiv Gandhi, who named the observatory, and its large telescope after Bappu. The Vainu Bappu Observatory is one of the main observatories of the Indian Institute of Astrophysics, also initiated in its modern avatar by Bappu in 1971. Later, a number of discoveries were made from the Vainu Bappu Observatory.